Hi everyone! This interview about game design with Chris Bourassa, Founder of Red Hook and creator of Darkest Dungeon, has its questions based on the knowledge gathered in Disempowering fantasies and Emotional engagement in Darkest Dungeon. Check it out first to fully understand how the whole concept of this game is designed to represent a disempowering fantasy.

Q1: The progress in Darkest Dungeon is something that requires a lot of effort and resilience from the player, being the game difficulty the main reason for it. This characteristic of the game does not only show the player the cruelty of the world he or she is playing in, but it makes the game a constant challenge ¿Do you think that the perseverance that you require of the player is one of the reasons that the victory feels so rewarding, while the defeat feels so harsh?

"We wanted to explore power and heroism by contrast. Instead of adopting the typical videogame fantasy of being super-powered in the game world, we sought to make those moments rare, and as a result of their scarcity, they feel more valuable. The game is marathon, not a sprint. Success comes from learning to mitigate bad situations, and capitalize on good ones over time."

Q2: While thinking about the game balance and difficulty, ¿Do you had as a design objective making the player and his/her characters feel vulnerable to the dangers of the battle in each combat?

"Absolutely. We wanted players to feel that anything could go wrong at any turn. That uncertainty creates dread! Being able to roll with unforeseen complications is central to any leadership role - and certainly important for high level play in Darkest Dungeon."

Q3: Sometimes, in your title, the player must understand that the endeavor and effort that he or she puts in a mission doesn’t mean that it will be accomplished. Destiny and our own luck can be our demise, without us being able to do something to change it. ¿Does the message of Darkest Dungeon require the player to fail and accept his or her defeat in order to be understood?

"Yes, we challenge players to make the best of a bad situation, and not to expect victory with every outing. There are things in our lives that we cannot control, and times where, despite our best efforts, we have to admit defeat, and regroup. We sought to represent this in-game - a good leader knows when to cut loses and run! We ask that players strategize at the campaign level, and accept that along the way, there will be losses and setbacks."

Q4: While talking about the difficulty, one of the main reasons that make the experience so harsh for the player is how the impact of our actions will define, in a game where the player cant repeat his or her decisions, the life or death of our heroes. This creates a lot of pressure for the user, who has the responsibility of pushing these characters towards the objective no matter what happens to them. ¿Does Darkest Dungeon pretend to make the players feel guilty for their actions and mistakes?

"We didn’t set out to make anyone feel guilty for their actions, per se. Rather, our goal was simply to create an environment where a player’s decisions really matter. The only way we felt we could accomplish that was to make your in-game choices final, and irreversible. That raises the stakes, and increases tension - both important to a horror game! We drew inspiration from poker, where losing chips has a real, tangible cost. In Darkest Dungeon, you're not risking your money, you're risking the time investment you’ve put into your party. You have to have some skin in the game to feel invested!"

Q5: Heroes are the most valuable resource for the player. These characters are the tool that we need to accomplish each mission, but they are not 100% reliable because their vulnerability and capability of failing attacks, take their own decisions and obstruct the rest of the team. ¿Do you had as a design objective creating characters that felt the most humanly possible?

"We were looking at how to emulate a management role. You can set targets, organize a team, and push them forward, but ultimately, the team members will act on their own. We let the characters ‘act-out’ when they are afflicted or virtuous to reinforce the notion that these are distinct from you, the player. They may not always be able or willing to follow your orders. We took inspiration from our time as managers in the game industry during times of high pressure. People respond differently, and you need to be able to keep them on track!"

Q6: In the same way that the users may have positive emotions towards their characters who made significative things for us, the player can hate his or her characters too when they fail us or hinder our progress. ¿Was this phenomenon something you wanted the player to feel while playing the game?

"Yes, we wanted players to struggle with the understanding that their heroes are simply means to an end, but also feel attached to them. That discomfort is a great way to put subtle pressure on the player. The roster needs to be pruned from time to time, and ‘firing’ heroes is part of the process."

Q7: In other games, leveling up a character means that their statistics and abilities will be upgraded, while in Darkest Dungeon our heroes will gain negative traits too to show the real cost of the battle. ¿Is making the character have trauma and suffer for our mission something that you wanted the players to see in order to understand the cost of ours actions?

"Yes, accumulating negative quirks, diseases and stress is our way of showing the toll that the adventuring life is taking on the heroes. This cannot be an easy way to live, and the upkeep cost of a whole roster is significant. Behind the scenes, players in Darkest Dungeon are really running a business - juggling income with expense and trying to achieve stability and growth. You can treat your staff as disposable, or you can pamper them - the decisions around roster management are just as important as which skills to bring into combat."

Q8: The heroes that the players has to his or her disposition have some customizable elements like their names and color palettes. ¿Which benefits have this customization elements if they are not going to have gameplay impact? ¿Why do you let the users change that?

"I think being able to name something makes it more personal. Easier to get attached to something you’ve named yourself. That was the main reason - to build players’ attachment to their heroes. It’s also kind of fun to name heroes after your friends and see how awfully they die ;) If we had a bigger budget on Darkest Dungeon, I would've liked to have added different hero skins to the game as well!"

Q9: In the citadel, one of the buildings that the player may visit is the cemetery, where you can only see the tombs of the heroes that died under your orders. ¿What was the function of this building?

"Well, it’s cool to be able to see the human cost of the campaign you’re running - see just how many people you’ve lost in your pursuit. Ultimately, that factors into the story (no spoilers), but really the graveyard is there so you aren’t able to forget about your missteps."

Q10: In the final mission of Darkest Dungeon, the combat against the Heart of Darkness, the game breaks some of the basic gameplay elements that the player must know until that point to generate horror and uncertainty in the user. Among them, the ability “come unto your maker”, which makes the player choose between his or her heroes who is going to die to this attack. ¿What do you wanted the player to feel at this moment when, he or she, is choosing deliberately who is going to get killed?

"I’m very proud of that fight, in particular breaking the ui flow for ‘Come Unto Your Maker’. The intent here was to create a lurch, or confusion and fear in the player - to align them with the in-game heroes. The first time it happens, people are shocked that we just wipe out the chosen character. The second time it happens they agonize over who to choose to die. It’s a great moment to watch on twitch! There was a narrative reason for this encounter as well - you’re fighting the actual heart of the planet - it’s crazy to think you’re going to beat it to death with a sword. We had to make the boss feel so big and powerful that it was almost insurmountable. I mentioned the time investment you put into building up your heroes - well we just delete them in this fight. Forever. Being so callous with a player’s investment adds to the sense of futility and nihilism that characterizes the end of the game." 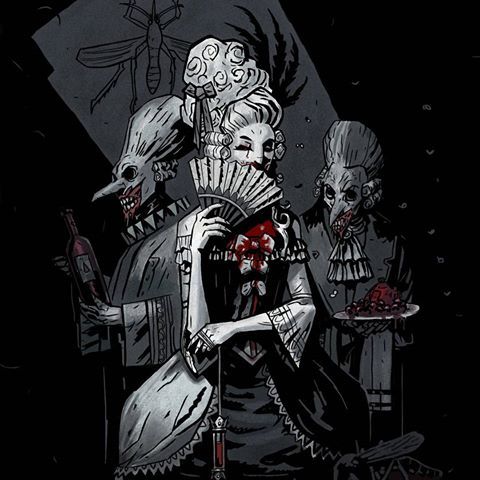 Original art made by Chris Bourassa for Darkest Dungeon: the Crimson Court